greatwall1958
Home > News > Industry News
What is the mechanism of kiln shell corrosion behind the refractory lining?
PDF Download

Corrosion of the rotary kiln shell behind the refractory lining has become an increasingly serious problem for cement industry as it acts silently and reduces the shell thickness to below critical structural and mechanical limits of stability of kiln shell. Understanding the factors influencing the kiln shell corrosion and its formation mechanism is the best way to inhibit it. Corrosion of kiln shell behind the refractory is influenced by a number of factors such as composition of the metallic shell and its environment, temperature of the shell, cleanliness or roughness of the shell surface, its contact with other materials and severe process conditions. Carbon dioxide and sulphur dioxide are active scaling agents of iron and steel. The main reason of shell corrosion can be attributed to alternate oxidation at high temperature and acidic reaction at low temperatures when the kiln is stopped for repairs. The corrosion phenomenon takes place mainly due to presence of oxides, chlorides and sulphide at high temperature. There are three different kinds of kiln shell corrosion are observed in cement kiln systems: 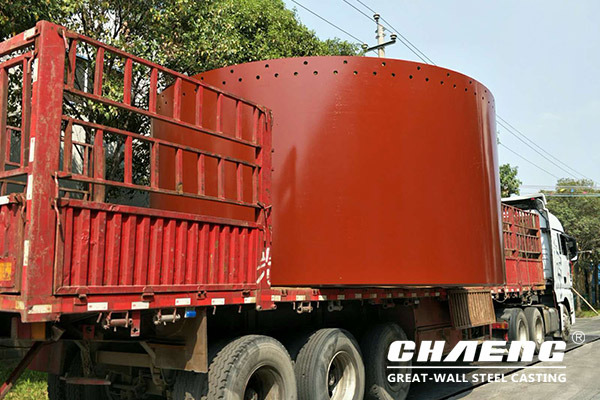 1- Corrosion during kiln operation resulting in scaling of the kiln shell by oxidation of the metallic iron at elevated temperature (so-called high temperature corrosion) .

During kiln shutdowns, deposit of salts containing potassium chloride in particular on the shell becomes active because being hygroscopic (absorbs atmospheric moisture). The chloride can reach the kiln shell in the form of gases but alkalis can only penetrate refractory lining as a part of liquid potassium and Sodium salt melts. So if product of corrosion contain substantial amount of potassium and sodium, the form of corrosion is termed as hot corrosion indicating that liquid phase take part in reaction.

Main Products
CHAENG will participate in The Bright World of Metals in Germany, Welcome your arrival！ ×